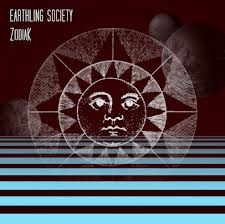 The UK Psychedelic Space rock band, Earthling Society is back with a new record. This one was all recorded on one day in July 2012 in Blackpool, UK. The band is stripped down to just a three piece on this release so the main tracks focus on Fred’s spacey guitar, the bass and drums but there are also layers of extra guitar, spaced out sounds, synths, etc.. You hear it is a bit more freeform though. Zodiak starts things off and is a mid- paced and pretty psychedelic track the way the guitar and vocals are mixed. The drums have quite some reverb and the snare is loud and really cuts through the mix. The Silver and the Black really picks up the pace but the sound is quite psychedelic. The section just before the guitar solo is really tripped out. Quite a long track, over 10 mins. The million headed Cobra of Eternity is a shorter song that ends the A side of the record. It starts very mellow and floating but features some great multi-layered guitar. It is mostly instrumental until the end. Great stuff. Now, flip the vinyl over and start the 2nd part of your journey with Silver Phase. Silver Phase starts in the middle of a jam and is faded up just as you can catch the beginning of the trip. IT has this really heavy effect on the sound which gives it this really spaced out sound but it is over in just a couple of minutes. Strange.. The Astral Traveller takes the rest of the side and it starts off reminding me of the great Hawkwind classic, 7 by 7. Fred plays some fantastic guitar is this great long floating, spacey track. The track seems like it is coming to a end with a lot of spaced out guitar effects but then he kicks back in with a riff and the band comes back driven by a heavy bass line before the guitar really takes the lead again. They return to the 7 by 7 like theme at the end. Fans of early Hawkwind will really dig this record. I should mention that this will also be released on CD by the 4Zero Records label, which has released many of the bands other records. It will include 4 bonus tracks.

http://www.earthlingsociety.co.uk http://www.4zerorecords.co.uk
Posted by Scott aka. Dr. Space at 5:44 AM