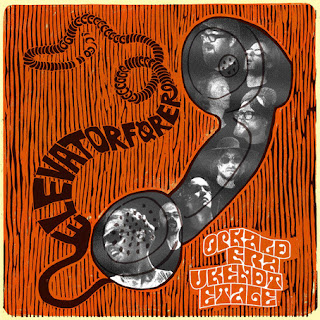 Elevatorfører is a new Danish psychedelic rock band. They are a large and quite funny band and all the songs are sung in Danish and the band dresses in cool attire for their live shows. This album was recorded live at the Copenhagen venue, Amager Bio. The band was opening up for Young Flowers and Spids Nøgenhat. Den Magiske Skala opens the record up with a pretty rocking uptempo track where as on most tracks, the farfisa is the lead instrument. Søsangen (The Sea Song) starts with the sounds of bubbles being blown into a large bucket as the singer tells the audience it is ok to smoke your joints now. This is a beautiful floating song. Ukendt Etage (Unknown Floor) starts with a real 60s style guitar line and the farfisa again takes the lead. Skovtur (Forest Trip) features some acoustic guitar but is a track you could imagine at the Matrix in San Francisco in the 60s. Side B starts with Den Hypnotiske jakke (The hypnotic Jacket) features a more psychedelic keyboard and is one of the longest, best and most psychedelic tracks on the record. Vertikal Bus (Vertical Bus) is back to your straightforward farfisa driven 60s track. Samerens Rejse (Same’s Trip) is a quite spacey track as the band meanders and the different instruments add to the slow moving soundscape and the singer gives his best vocals. Now the trip is over, about 35mins. If they had used some vocal effects, more liberty with instrument panning,etc.  it would make the music quite a bit more psychedelic. While the mix is really good, the ones mixing don’t really have that much of a sense for the psychedelic even though that is the genre this music is in.  Cool release, especially if you understand Danish and are fans of 60s organ driven psych. The record is released on vinyl only in 500 copies but also comes with a coupon for the digital version as well and a large full color booklet with great photos of the band and event and all the information.

http://elevatorforer.bandcamp.com  LevitationRecords
Posted by Scott aka. Dr. Space at 8:53 AM