In the Labyrinth- One Trail to Heaven (Trail Records 011) 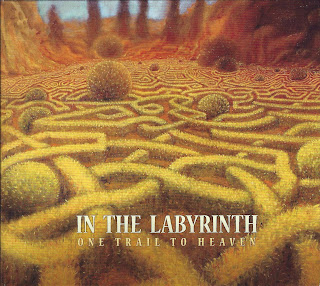 In the Labyrinth are a Swedish duo playing psychedelic world music that have slowly over the years migrated to a more new age sound from their more organic roots but still are damn cool. This is a compilation record with tracks from all the bands records as well as some remixes and unreleased material as well. They have ten guest musicians on the CD as well. The CD comes in a fantastic digpack with brilliant artwork by Valeria Trubina. The CD opens up with Lost in the Woods from the Dryad CD but this is a version with a longer introduction. The next 3 tracks are all from the bands debut CD called The Garden of Mysteries released on the Ad Perpetuam Memoriam label in 1996. The bands CD, Walking on Clouds gets a sampling as well with the next two tracks. Then back to Dryad and a an all instrumental version of Deep Saffron also from this record. The last three are all unreleased tracks and I will describe them in more detail. The Endless City is very short at just over 3mins. It is a bit spacey, eastern and mysterious and really builds up a cool mood and has a lot of psychedelic things going on in the background and some cool electric guitar but then it is over. Cities is a Moody Blues cover from the amazing Days of Future Past LP. This version features the sitar at the beginning and is also very beautiful. The CD ends with an extract of a song called Cloudburst. It has a female voice and is very floating spacey and new age like music. A really good introduction to this cool band if you have never heard them.

http://www.trailrecords.net
Posted by Scott aka. Dr. Space at 9:56 AM