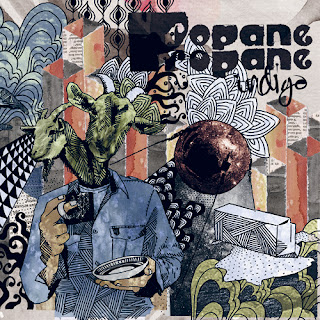 This is a private press in 5-600 copies on a pretty new German label called Clostridium. The band is from Sweden though. I got very lucky to come across this one at the last record fair in Copenhagen (thanks Tobias).  Never heard of the band. The A side begins with Rise. It starts spacey and builds up quite fast before the heavy stoner wall of sound kicks in. Very inspired by the New Zealand band, Arc of Ascent, except there are fewer guitar solo parts. The vocal has an effect on it so it is not so clear but more distant and spacey. There is a nice melodic thread in this song, especially in the interlude. Kometh starts slow and spacey before the massive stoner riff kicks in. Cool song. ANT is a heavy and intense vocal and lyric about falling asleep with his head against the wall and finding his feet chained to the floor! Cosmic Hideout is a great track with a lot of cool guitar and spacey vibe. Truth slows it down and goes for a very heavy riff that is just pounding but it has a lot of dynamic parts and a real uptempo ending. This A side is really long, like 28mins as is the B side. Aquatic starts the B side slowly with an instrumental track that did not really grab me. Return of the Burning Son kicks in fast but then finds it pace before coming down to a slow bluesy section before they really take off with a solo.. Food of the Gods has a really cool bass line and then the large riff kicks in, in the same way that Arc of Ascent build their songs but this is a bit more raw and psychedelic some how. The LP ends with the 12 min title track, Indigo. This is the most spaced out track on the record as the band really go out there… Damn cool record. If you like stoner rock but stuff that is more on the psychedelic and spacey side, for sure check this new band out. This is a vinyl only release in 3 colors. I have number 117/200 on black vinyl.

http://clostridiumrecords.de  https://www.facebook.com/PropanePropane
Posted by Scott aka. Dr. Space at 9:35 AM