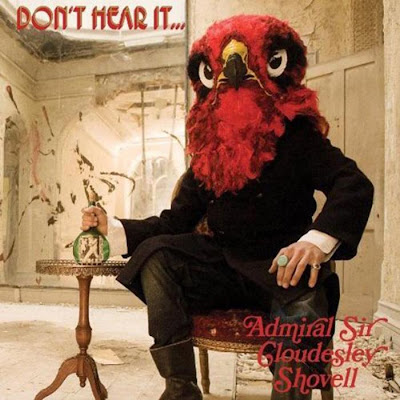 ASCS is a really cool raw blues rock trio from the UK. I saw them play at the Roadburn festival in 2011 and they really rocked the house with their brand of intense blues rock. I was really looking forward to this LP and it does not disappoint, in fact it blew me away. It must be played LOUD… I also ordered quickly and got the special edition with the extra 7” record.  Anyway, the record starts off with Mark of the Beast. It starts off with a strange crazy intro but then the real gritty rock and roll takes over with a sort of punky attitude but the music is nasty rockin’ blues. Devil’s Island starts slowly with the bass leading the way as the Johnny slowly comes in with his guitar before the major riff that the song is built on kicks in. The effect on the vocal gives the track a eerie feeling. It takes the track some time to build and evolve. Mid way through the song takes off with a several short guitar solo breaks and a great jam with some cool bass playing. iDeath is the last song and a really uptempo and intense rocking song. Some people will probably slag the vocal as he is not really a proper singer but a guy who just really expresses himself vocally in an intense manner. It suits this raw and nasty rock and roll that they do..  Satan is smiling now and says please flip the record, I need some more… An untitled short piece that fades up and within a minute fades away leads into Red Admiral, Black Sunrise. It slows things down but has a cool slow heavy guitar riff and there is some nice solos thrown in as well and it really rocks out at the end. This is my favourite song on the record. Scratchin’ and Sniffin’ features the bands friend Jay on organ and Tony McPhee (Groundhogs) on slide guitar. Dirty, slow and heavy, while The Last Run brings back the speed and intensity. The LP ends with Killer Kane which features some intense guitar playing and is just a really rough and ready song. If you are curious about the songs on the 7”, they are November and Cursed Earth, both original numbers.  November features some organ (much more prominent than on the early track) and is a very cool song, totally different than all the others and the guitar plays with the organ to create some brief harmonies before the solo section. Still rough, raw and powerful stuff, especially if you can crank it loud! Cursed Earth starts with some really crude and nasty, drunken slide guitar. The track is very closely modelled on the ZZTOP track, Goin’ down to Mexico from the 1st album.  They did a great job capturing the raw essence of the band at the Foel Studio in Wales.