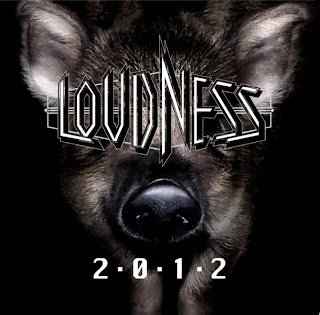 A pretty straightforward title for the new Loudness CD. Thanks to my friend Hatsumi, I have been able to stay on top of the bands activities over the last decade or so where they have only been releasing records in Japan and on a yearly basis. This is the 2nd CD with the new drummer. The lyrics are more political, more powerful in some way and very passionate. The CD features 11 tracks and two of which are instrumental. I loved the instrumental track on their last CD, Eye to Dawn. The opening track, The Stronger starts slowly with some melodic guitar and then at 45 seconds just takes off at Slayer like speed and attack and then the attack becomes a bit less intense when Minora starts to sing. 2012- End of the Age is also another really aggressive track with some killer lead guitar. It has slow and fast sections but is mostly very intense. They lyrics are a bit depressing but true. Break new Ground slows things down but does not decrease the intensity of the music. Driving Force is a war song and has a very cool guitar riff and hook. I wish they did not fade out the guitar solo at the end as it was really awesome. Amazing sound production on this record. Behind the Scene is mid-paced and Akira kicks in with some wah guitar but the riff is still massive and the lyrics very powerful. Bang em Dead is a very intense track at the beginning with this machine gun double bass but then the basic up down guitar riff rhythm kicks in but Akria is mixing in some sool guitar every place he can squeeze it in. The Voice of Metal (Song for RJD) is a cool song dedicated to Ronnie James Dio. A true tribute song, done Loudness style! Who the hell Cares is a slow, really heavy track again with potent lyrics. The ending is really nice and spacey and totally different. Spirit of the East starts with a little bit of Hendrix inspiration. I wish the band would do more of these style tracks as this is such a cool track but this one was too short at 2 mins. Memento Mori is a mid paced track about living your life. The CD ends with the instrumental Out of the Space, another short 2min piece. I am not sure I agree with the song order on this record but it is a great one. They put all the really intense songs together and should have put these instrumental ones in between rather than at the end..

The booklet is massive and the Japanese version comes with an extra CD with just one track that is only 5mins long, which seems like quite an extra expense for only 5mins of music. Maybe I should throw it in a computer and see if there is a cool video on it or something extra?? Anyway, the track is called Deep-Six the Law! It starts with a keyboard or guitar synth and is another pretty heavy one but also one of the most mainstream (musically). It is about the US (or any other gov’t) passing laws that take away your freedom to see a lawyer, in the name of freedom, but’s how can you be free if they can lock you up forever without being able to see a lawyer and fight your case… This is not for freedom, this is for hiding away the people who threaten to remove you from power….  Sorry for that political statement..