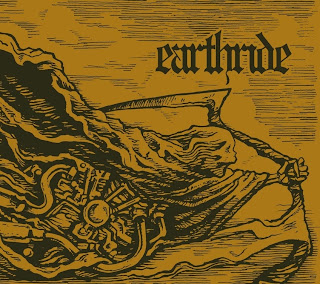 This is a re-release of the long out of print first EP that US band Earthride released back in 2000. I had not heard this before and it really blew me away. It is in a limited edition numbered copy in a nice digipack and it last includes 3 live tracks (one from each of the bands 3 records) from the Stoner Hands of Doom Festival 2011. 39 minutes of music. The opening track totally reminds me of like 1978 era Motorhead and Dave really sounds a lot like Lemmy as well. Earthride opens and is quite a long track with fast, and slow more doomy parts. A great track with some cool guitar sections. I wish Motorhead made such raw music as this today. Black has a hypnotic groove and has a very dark evil lyrical content at times. Enter Zacfreyals is an instrumental song and speeds things up and then a very Spirit Caravan like groove kicks in and you could almost place it and then it takes off in again and back again. Weak End also is a great heavy groove rocker that slows down and gets more doomy at the end with a nice bluesy solo. Fighting Devil’s Inside You is the first of the live tracks. What a fuzzed out wah guitar to start this track. Wow.. Hacksaw Eyeball is from the bands latest studio record, Something’s Wicked. A heavy stoner groove. For Mere Remains closes this CD. I dig it..