This was a really cool closed street festival in the heart of Helsinki in the summer. There were 11 rooms/stages with live music and DJs and over 3 days. The music started at 18 in the evening and some of the DJs rooms went until 4 in the morning. The festival was sold out and I met a lot of really cool people that I know including the guys from Circle, Jukka, Jussi, Jurtzu, the guys in Hidria Spacefolk, etc.. I was only able to come on the one day but on the first day some really cool bands were playing like Moon Duo, Black Lizard, Kurt Vile (he was the headliner) and Räitö ja Lehtisalo (guys from Circle).

A very cool set up with lots of stands selling stuff and different kinds of cool and beer. When we arrived Kim Gordon (Sonic Youth) and Ikue Mori were doing a strange experimental music set. Kim played guitar and sang while Ikue made atmospheres with stuff from a laptop computer. This was the main stage in between the buildings. A Finnish group called KXP played some kind of electronic kraut rock stuff with two drummers (One from Circle) a bass player and the leader who had a sampler synthesizer and did some vocals. This was really cool stuff. They could have used a lead guitarist though..

Next up was my friend in Hidria Spacefolk. I had not seen them in 2 years when I came to Helsinki for the 10 year anniversary show. Anyway, they only had a 45min set and played 4 songs including 3 new ones from the new CD/LP that will be out in September. This was the coolest stage that they played on and it sounded just fantastic up in the front and it was really loud! The new material is really powerful and heavy and more progressive. Originally their synth player was going to have trouble making the gig and their original player was going to join but in the end the current line was intact and rocked the place. The track was a long spaced out version. Great band. After the show I hung out the the guys and some of their girlfriends..

Next I saw a bit of a US band called the Black Lips. They play some sort of indie garage rock. The songs just lacked some coolness.. They had the look and were nice guys. The crowd was pretty big but the people did not seem very engaged compared to for KXP. That was the last band on the big outdoor stage due to this being in the center of the city and they had to think about the neighbours.

Next, we saw some pretty strange stuff outside one of the beer tents. 4 Finnish guys playing guitars, very simple drum kit with a bucket kick drum, etc. and a guy with a bag filled with something that acted like a shaker. It was like a Finnish barbershop quartet. Apparently, the songs were very humerous. Quite difficult for non-Finnish people like me to understand but fun to watch. After that, Janne the guitar player from Circle did a solo set which was most songs sung in English and played on banjo. That was really good and very organic like something you would hear in the south of the USA and played on banjo. 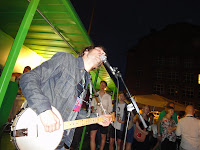 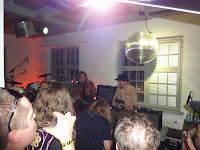 I popped around and saw bits and pieces of acts like Pekko Käppi and Faarao Pirttkangas doing acoustic blues stuff, Pekka Airaksinsen doing some solo laptop electronic stuff. We wanted to see the all female garage rock band, the Splits but it was way too packed to get into the Red Bull Garage. The next day was Circle, Iceage (Denmark), Acid Kings (Finland), and Veronica Falls (UK) plus lots of DJs.. What a cool festival and a great vibe. Everyone was so happy and the weather was amazing like 25C! If you want to expose yourself to some cool underground Finnish experimental, electronic music this is the place.