This was my 5 year in a row coming and playing at Kildemose Festival. The site just gets better and more beautiful each year. This year they had more bands than ever playing and expanded to start the festival on the Thursday with a free day. Only a few bands played on the Thursday. It was so nice to see some many friends and also new people who came from Holland, Germany and even Sweden, wow! I was not at the festival on the Thursday but what I write below is based on talking with people who were there!

Unnamed Unknown started the festival off, just as they did last year. They are a young band from Fyn that is really inspired by Nirvana but they play it really well with a lot of energy and dedication. I wrote about them last year. Next was the organizers son’s band, Kholors. ØSC played with them 1½ years ago. The big act for the day was the Flying Eyes from the USA. I was told there was about 300 people. They were supposed to have torn the roof off the place and played an amazing gig…. The local Danish punk rock band, Black Pussy closed the Thursday night. The band recently released their debut 7”.

14:00 Thomas picked me up at little before 14 and we were off on the highway to Fyn. Traffic was not bad and we heard Kyuss and some Ozric Tentacles as well on the drive. We arrived just before Troldmand started but sadly we missed Syreregn but I heard they were really good.

16:30 Troldmand took a long time to set up and had all sorts of small problems but did not seem in much of a hurry either so their set was cut off short as they have so many bands this year and a curfew, they really have to stay on schedule so Jan was being tough on the bands. I think they played about 35 mins and the first two pieces were real slow and spacey, like the band was really hung over. They really seem to push the energy level up for the last two numbers. I think the people who saw the set liked it. Really cool spaced out music these young guys are making. The band themselves were not very happy with the set. They were playing tomorrow opening for Bardo Pond in Copenhagen.

18:15 Fjodor managed to make it up from Croatia for a 2nd time at Kildemose. They had a new synthesizer player from a band from Belgrade called Temple of the Smoke (cool stuff). The band played the entire new record and this took their set to 15mins over time but no one was stressing about it. The band plays really cool instrumental music with a really strong drum and bass duo. Great dynamics. A bit like Ozric Tentacles maybe but they do it their own way and are not as electronic. Cool band.

19:30 Papir was really fast to set up and almost started on time and played a killer set! They had some super cool jams. If you don’t know Papir, they are an instrumental trio who have released a couple of records, the latest one on the Causa Sui label, El Paraiso. Anyway, they played quite a few new songs from an album that will be released in December. Amazing high energy stuff with a lot of cool improvs and solos from Niklas, the lead guitar player. These guys play at a very high level. Awesome.

21 This was the first time for me to see Fuzz Manta with the new line up. I had seen some video on you tube though. Lead singer Lene has a synthesizer that she plays during the intro and then during the jams that they often take now. They opened up with So She Speaks from their latest and best record. The band is playing almost only tracks from their last record and new material these days and not much from the early records. Anyway, the new bass player and drummer are excellent give the guitar player Freddy, a lot of room for solos and you can see and hear the band are really confident now. Vertigo, is a Robin Trower song that sounds a lot like Bridge of Sighs at times. They did a cool jam in this song. The band really blew me away. In fact, every band so far was excellent and they were all improvising and doing it well. Cool set.

Set List: So she Speaks, My Baby in Vain, Vertigo, Sooner or Later, Motumann, Between the Lines, When I sleep (not sure they played this one)

Bite the Bullet, a new band featuring the core (guitar, bass and drums) of the band Highway Child, played their debut concert next. This was a band with a new frontman, a new energy and man, they rocked! Check out the video below. Sure they sound a lot like Highway child but the new singer has a great voice and really has fun while the band is jamming as well. I thought they might do one old Highway child song but it was all new stuff and great. A really rocking and jamming set. Paw, the guitarist, even played a small keyboard and trombone as well. Rocking….

Set List: I feel Love, Space Drums, Hit the Ground, My Soul, New Shit, Rock me Baby, I will not Die, Drive Back

The weather is just fantastic on this Friday evening and it is such a nice small crowd of people. Johnny (Transubstans Record), Christor and his wife were here from Sweden, some really nice people from Holland and our friends from Hamburg, who have now been coming for like 4 years, and Chris and Camilla from Switzerland. The festival really has a feeling of what it must have been like in the early 70s…. relaxed, people smoking joints, lying around enjoying life and good music and lots of bands making musical experiments and also enjoying being alive and making music.  No festival that I go to has this great vibe.

00.00 A band I had never heard of before, Freddy and the Phantoms hit the stage next. They are a blues rock band with two guitars, organ, bass and drums. A lot of their songs were pretty ordindary blues rock and they did not really seem to come into their own until late in the set when they started jamming a bit and having more fun. Paw, from Bite the Bullet, joined on banjo for one number.


01:30 The Diff, a Danish Grateful Dead cover band, had a screen set up with a small projector showing an interesting and sometimes strange picture collage while they played. It was really cool. A lot of people had gone back to their camp on the hill but still a decent crowd and a great sound and some dancing people. They always deliver a great show these guys. A very competent GD cover band. 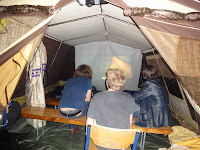 8:00 I was up early. It is beautiful weather once again. I had some juice, bread and cheese. Just relaxing in the tent. Last night the guys from Elevatorfører were showing Holy Mountain on a screen inside their large tent. They were really enjoying themselves and having a great time as well.

10:00 My friend Chris from the band, Phased, has started his ambient electronic set (B¤tong). It is strange ambient noise stuff that slowly develops over time. He has all sorts of cool gadgets and toys that he can make sounds with as it develops. It sounds like the sound inside a cargo ship traveling through the time space vortex.. Cool set..

13:45 Øresund Space Collective, started about 11:15, as it took us some time to find another guitar amp. Usually, Kildemose has backline for all the bands but not this year. I thought that we would play a very slow, spaced out set but Christoffer (drummer from Papir), really gave us some energy and Niklas (Papir) and Magnus (Mantric Muse) played killer guitar parts. Thomas played bass for the first three jams and Christian (Papir) the last three jams. The weather was really cool and people seem to really enjoy the show. Dave (Sula) from Electric Moon was supposed to play with us as well but in the end, we just let him sit and enjoy the set. He was really struggling these last days with terrible allergies. He and Lulu really loved the set. Towards the end, a guy from Argentina came up and did some singing. This is pretty rare for us. I could not really hear him very well but a lot of people thought it was cool and some did not like it at all. I thought we played a pretty cool set, just under 2 hrs. We got an excellent crowd response. Sadly, I had forgotten my recorder so there was no audience recording made. One guy did shoot about 45-60mins of video and the guy from Argentina; his friends were filming with an Iphone. None of this is up on you tube yet.  My back has really been bothering me so sadly, I will leave later. 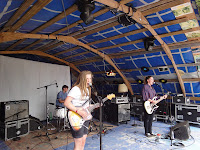 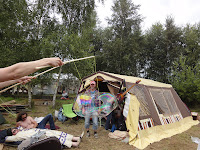 Next up was a very young band from Copenhagen called Baby in Vain. They are 3 15 year old girls, playing some pretty heavy intense stuff (two guitars and drums). They had some really good songs, almost stoner rock at times not indie pop like you would expect them to play. The only thing that was a bit annoying is that they have not really developed their voices yet so they still sound like small kids. I would not worry about this now, focus on the music and learn to rock, to jam and play.. That should be their focus now. Cool stuff.

ElevatorFører had totally changed the set by the time I came back from taking down my tent and packing my stuff up in Magnus’s car. They are a pretty big band playing very cool 60’s style psychedelic rock with Danish lyrics. Cool costumes and a great vibe made for a cool party in the afternoon. They said they will have a record out in December so I will for look out for this one and write a review. They were great.

Shiva’s Nat is a pretty new band and  I have never seen them play live. They have the bass player Morten Ex-Fuzz Manta) and the original singer Patrick from Highway Child, who sings and plays the guitar. The band play music totally rooted in the 70s hard and blues rock genre. They had some really grooving numbers and Patrick plays some pretty damn good guitar as well. They played most of their songs pretty straight up but the last one was a really long jam. Another cool 70s style band in Denmark. Awesome…

Basiru Suso was supposed to be a trio but ended up being a duo. He had an accompanying table player, which was great. We only hear a few numbers before we left. The bands that we missed later were: Dirty Old Town (guitar, bass ,drums from Bite the Bullet plus another guitar player and singer), Ram Goats (Fyn reggae band), Reverend Shine Snake Oil company (who I heard were really great) and Electric Moon. I heard they also played a very cool set but only like 20 people were watching them, which is a bit sad.

I had a great time despite having trouble with my back. Thanks once again to Jan D for organizing Denmarks best festival.