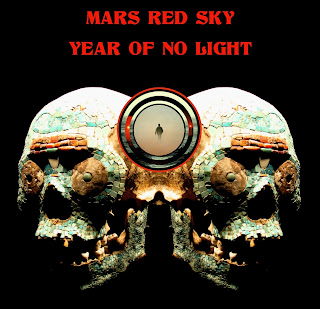 This is a pretty unique 12” featuring one track from each band then a track with both bands on the B-side. I was disappointed that the Mars Red Sky was just a track from their LP. The Year of no Light is an exclusive new track called Black Bath. I had never heard this band before so did not know what to except. IT starts slow with a cool stick rhythm by the drummer and some spaced out vocals (very difficult to understand clearly). It slowly builds up intensity and reminds me of a less stoned BONG playing in church for the heavy worshipers. Sadly, the track does not really develop at all and just ends. So far, pretty disappointing. Flip the record over and the long track, Green Rune White Totem with both bands plays. IT starts off quite spaced out and then the bass line starts. You can really hear the guitar player from Mars Red Sky taking the lead to create the cool melody line while the Year of No Light guys make the heavy rhythm. It spaces out in the middle and then the rhythm changes with a cool wah bass and some harmony guitars before really picking up speed for the last section. It slowly fades away with just some spacey guitar playing. This is a very cool track taking the best elements of both bands to make a cool track. You pay a lot of money to get this one though. Better be a really big fan.