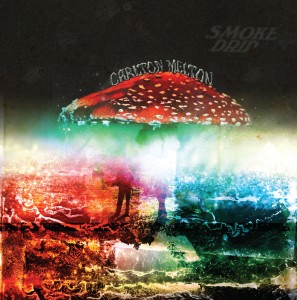 San Francisco space out band, Carlton Melton is back with a new three track record. It has a lovely cover but sadly my clear vinyl copy has a lot of surface noise on it at the beginning of both sides, which is quite irritating. A bad press?  What makes this release unique is that John McBain (Monster Magnet) plays on it, mixed and mastered it so it has a bit different sound (not quite as low fi as say the split with Bardo Pond) but the same totally stoned spaceout feeling. Side A is the LP side long track called Adrift. It starts with a jam with a quite slow pace and some noodling guitars and a keyboard drone. It is a very stoned piece of space drone but some more intense guitar solos come in towards the end as a heavier riff also develops half way through. The synths start to rise up and play a more active part of the huge soundscape that has developed now and the drums are nearly gone in the sound. Flip the record over for two more tracks, starting with the title track. A keyboard drone, some space sounds and a basic repeated guitar line starts things off. This track has more interaction between the two guitars to start but then the spaced out synths get louder and cause a weird distraction. These guys remind me a bit of a really slow motion Acid Mothers Temple who are super stoned. Trippy. The next track though is the most psychedelic and totally far out. A very noisy freaky song.  Far out… I think fans of older Bardo Pond would probably really dig this stuff. This is music for real stoners..

http://www.carltonmeltonmusic.com
Posted by Scott aka. Dr. Space at 7:05 AM