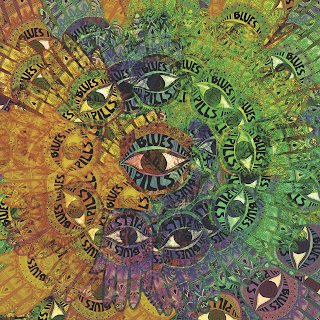 This is a really cool 7” package that comes with a large 2” pin of the cover and gray mixed colour vinyl.  The A side is a totally unreleased song called Black Smoke, while the B side is the song Bliss (original version) that you may have heard on the amazing 10” the band released on Crusher Records out of Sweden. The band is different from the 10” though as this is just the Swedish singer Elin with the two ex-radio Moscow guys, who play the guitars, bass and drums. Black Smoke starts off very slow and bluesy with a passionate vocal. It quickly picks up the pace for the next section and then back into the slow mode. Damn, Elin has an amazing vocal, she is killer. The track will remind you a bit of radio Moscow in the more rocking section, and damn it does rock. Bliss sounds just like a Radio Moscow song but with Elin on vocals with it’s intense wah wah guitar. None the less, it is a great song. Cool release, glad I got one. Some of the 7”s will come with a 5 pin set with each member of the current band.

http://maximumamesrecords.com
Posted by Scott aka. Dr. Space at 7:03 AM