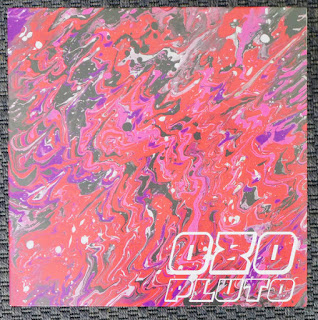 Mike Vest (Bong, Blown Out, Melting Hand, Dodge Meteor, Lush Worker, HaiKai No Ku, Drunk In Hell, Bong, Oblivion Reptilian) is one of the most busy guys on the psych scene.  A lot of his music is just super intense and I can’t say I have heard all of it except for BONG.. I am a big fan of BONG.  Anyway, this is the 3rd album by Ozo in less than a year.  The band features: Karl D’Silva – Alto Sax, Graham Thompson – Drums and Mike Vest – Bass, Guitars and Electric Saz.  So what kind of sound do these guys make?? The opening number has a heavy bass line that sort of leads the way while the sax is playing super intense stuff but mercifully it is mixed into the soundscape and not way too loud.  A bit later a wild guitar kicks in to add to the madness…..  Now, you have the idea.  Thee are some more wild and also moody tracks and while the bio describes this as jazz space rock.. I am not so sure I would call it space rock  as such. It is spaced and they can rock for sure but this is pretty hard to listen to for most people but I am sure they will find a fan base to sell the 300 copies..    Music for mad minds in fucked up places seeking shelter from the asteroids!!