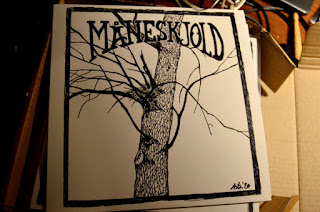 The Danish Space rock band, Måneskjold (Moon Shield) are back with a new 7” set up to promote their 2nd full length record, due out in December on Kommun 2 records.  Side A is a track. I believe is on the record (   ), while the B-side is a live in the studio track, not on the LP.  De Højeste Træer (The Highest Tree) was recorded at the famous Sweet Silence studio and they worked with Flemming Rasmussen (Metallica, Mercyful Fate, etc..)… The track, really caught me off guard as it does not sound anything like the band and is certainly not space rock! The band still sings in Danish but this is a pretty straight rock and roll song quite melodic, might even get played on Danish radio! Nice guitar mid section.  Flip the record over and this is a bit more raw and psyched out with a track called Fjernsyn (TV).  IT starts with a strange synth (played by Kriller, who also mixed this track) before the band zip off into a strange jam of sorts with noodly guitars and that strange buzzing synth phasing in and out, keeping you a bit off balance. They later mix in a sample in English over the top of a long section while they keep jamming.  It will be interesting to see what the new album is like, more polished and straight or more freaked out like the B-side?? I have no idea..