Stonegazer- The End of Our World (Artifact 89CD) 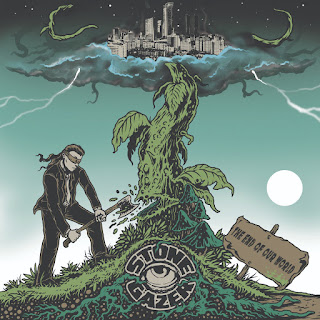 I had never heard of this Finnish stoner rock band who seem to have been around since at least 2012 but the more I hear this record the more I get into it. They have two guitar players but there are not many guitar solos, just heads down kick as stoner rock riffing most of the time. The singer, I really like, and he reminds me of someone but I just can’t place it. The title track starts things off with a mid to fast pace.  Short ripping solo and then back to rock! Vapor Trails starts a bit slow and doomy with just bass and drums before the main riff kicks in. This one is a builder!! Automomy busts out of the gates fast and furious. Heads down, bang away! At 2:40 the track takes a left turn and slows but the groove is cool.  I was just waiting for a ripping solo but it never came. Leviathan starts with a section with only vocals, drums and bass before the steady riff joins and the track develops in this more slow and moody track. Bring down the Rain also brings down the intensity with the slower pace and a bit bluesy at times but it builds up with some intense drumming at the end.  Fool Moon starts off slow and bluesy as well and this track features a nice guitar solo. A great groove develops on this track. The final track is called No Grace to Fall From and also a slow to mid paced track and a great wah solo and passionate singing. Wow.. This album grows on you. Finnish Stoner rock… Kiitos..