Mercury Boys- Return to Cinders 12” EP (Who can your Trust) 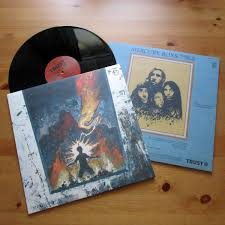 This is a limited edition EP from a new band featuring Guy (Orange Sunshine) on vocals, Christian (owner of Who Can you Trust records) on drums, Janik on guitars and Timothy on bass/guitar. It features 4 songs, 2 per side. It plays at 33 RPM but the songs are short enough they for sure could have done 45RPM for higher audio quality. Anyway, this is some low fi stuff, down and dirty rock and roll starting off with Atlas Falling.  This has quite a special sound production with distant drums, loud guitar (at least one of them). Guy’s vocal is raw and not easy to understand what he sings.  Not an untypical sound for Guy’s Motorwolf Studio in the Hague. Saturnus Tactiturn slows things down a little with a heavier riff and plenty of small solos here and there on this instrumental. Almost sounds like it was more an idea they did not quite finish! Side B starts with Apollo Phoenix Rising another dirty rocker a bit like Blue Cheer to start and then later is slows and there are some dual guitar parts.  The American Ruse (MC5) ends this short record and you can sense they had fun with this. Great to see Guy making music and this record is dedicated to the former Orange Sunshine guitar player Arthur Van Berkel.  Only made in 200 copies. There is also a special edition in 30 with a different sleeve.

https://whocanyoutrustrec.wordpress.com/
Posted by Scott aka. Dr. Space at 8:29 AM