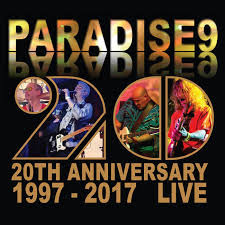 Paradise 9 are a UK psychedelic rock band with a lot of other influences as well that are celebrating 20 years on the UK music scene (I don’t think they have ever played in Europe?).  The band has made 2 full-length original records, an EP, a live CD and live DVD.  I have and have reviewed most of the bands release and Greg was kind enough to send me this excellent compilation, which includes a poster with all the 2017 tour dates and the family tree on the back side.  This compilation features 20 tracks. The first CD (These Days) is mostly made up of a set of songs from the Blind Cat Festival and Kozfests 2016.  All of the tracks are original compositions and not cover songs!!  The recordings are quite nice from both festivals. The 2nd CD, Those Days, features highlights going all the way back to 1998 and 1999 with a few tracks from 2000 and 2013 (but nothing in between).  I really dig the way this band plays some straight up space rock and then also some more aggressive punky, punchy material and then some really spaced out at times.  I think few outside the UK really know them, which is a pity as it is a cool band and really nice people. I only saw them once in London a few years back.   Anyway, you can support the band by picking this one up on their web site. Enjoy.