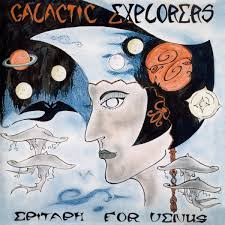 This was originally released on the Purple Pyramid record label in Germany from 1974. Some have argued this was the first record that was called ambient music.  The re-release is a digital transfer from the original tapes with a new mastering for CD. The band features three members, all playing a variety of keyboards. The album is 3 tracks in 45mins and starts off with Lunarscape (17mins). This has some very repeated synth sequences over which a lot of cool spacey sounds, bells, and other sounds are layered. The main sequence is pretty fast so this really keeps your attention as the track drifts and glides through space. By 10mins the fast sequence has disappeared and you the music is really mellow and spaced. Wow. Ethereal Jazz (15min) starts off with a Set the Control for the heart of the Sun like vibe with some cool percussion, layers of piano and other things over the VCS3 like loop. This track is more experimental and searching, space jazz? Check it out below. Venus Rising is the last track (8min) and a slow building cosmic trip.  A very cool release. I would love to own the vinyl of this one!!