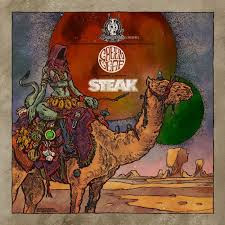 This is a pretty cool release. Greenleaf provide their very first track, Sold my Old Lady (out of the back of an Oldsmobile), released 17 years ago!  This song was on their debut 7” back in 2000. I had never heard this track.  The band’s sound is for sure more raw and in your face than today. Track is pretty simple but I dig the vocal, simple groove and psychedelic guitars.  Great track.  Steak (lead by London Desertfest organizer) are back with their first new music since their debut album Slab City (2014). The track Overthrow starts with a solo guitar line and some freaky sound feedback in the background before the main stoner riff kicks in. Wow.. what the fuck, the snare reverb?? That is special. It really distracted me before the groove kicks in and off we go folks. This band has a really powerful singer (he blew me away when I saw them live!).  A bit predictable but powerful stuff.  This was released in 430 copies on three colours of vinyl (oniy 30 black!).