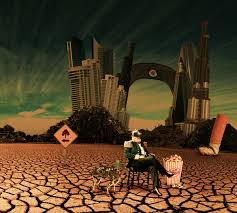 The Spanish trio Ethiva are finally back with a great follow up to their first record which was in my top 10 back in 2014 when it came out.  Like they’re previous record there are several editions include a die hard one with a jigsaw puzzle (like last time) of the album rear cover artwork. The artwork is very cool and creative.  The album starts off slowly with the track Walk among the Stars. Cris Alverez is a guest vocalist on this opening track and also Velvet Fog (2nd track on side B) and has a voice a bit like Jon Anderson but with his own unique quality as the band plays a beautiful building track with the guitar going from clean to spacey to solo mode while the drums and bass give Javi a lot of space to play great guitar. While the Hills is another emotional track sung by Jandro, the bass player. He has a similar style as Cris but can not sing in as high a register. The track is a great 70s style melodic rock number though with lots of dynamics. Long Lost Friend starts off like One of these Days by Pink Floyd but then goes off in its own path and features some very nice guitar playing by Javi. Side B starts off with Eslinga, which has a great instrumental start and faster pace and is a very cool song but sadly is faded out way too soon (maybe to make it fit on the vinyl?). I want to hear the whole jam?? Please…  Velvet Fog is a more melodic track but again a bit faster and different. Emptiness slows the pace down and has some really excellent melodies, feelings and guitar playing. The whole band just plays so well together. Great song. Love the openness and cool vibe they have. One of Them is the last track and very short instrumental (perhaps edited as well?).  Lovely record. The whole package, presentation and music. Great…. 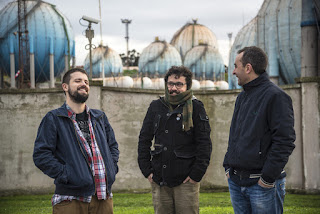 1. How long have the three of you been making music together?
Jandro and me since I started to play guitar, like 15 years ago,in several bands but Ramón joined the band in 2012.

2. What is the origin of the band name?
Ethiva is not a real word, We created it trying to put a name to the concept that we had in mind,  a kind of fantasy world in context of our music.

3. Who's idea was it to include a puzzle with the die hard versions of the two albums you have released?
The Idea was of Andy (clostridium records), he always includes a little present in his "die hard editions"

4. Describe what a live concert is like for Ethiva? Do you improvise at all or just play the songs like on the album?
For us is really important the feeling in the moment to play, ambient, people, place....i don´t know,  but we play in fuction of this feelings, some parts we try to play similar the album, vocals parts specially, but we always let space to the improvisation time.

5. Would you like to play outside of Spain?
Yes, of course, in fact for us is like a target. As I told you privately, sometimes Spain seems to be very far from anywhere, we just need the opportune call.

6. What do you see in the future for the band??
Well, about the future I hope see another record, i think we have not more pretensions.
Posted by Scott aka. Dr. Space at 11:55 PM