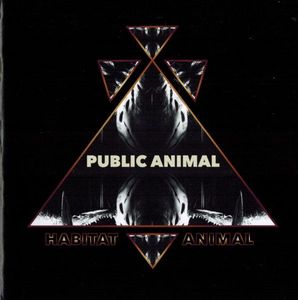 Public Animal is a Canadian band from Toronto, Canada.  This is a rerelease of the bands debut from 2014.. If you check their web page they have a new split LP out. Anyway, this is the first time people in Europe really get exposed to this record. The four piece band are a bit of a strange choice for Elektrohasch as this music is a bit outside the core audience of the label. The opening track starts off with some far out spoken word stuff before the classic 60’s organ sound kicks in and the rest of the band follows lead by a melodic guitar line, which then gets double tracked. Ian and Caitlan (the female keyboard player) share the lead vocals. Pretty standard 70s rock track with make and female vocals, nice organ playing and a short but sweet guitar solo. I ain’t gonna Live has a catchy blues rock riff to start things off before the band kicks in on this uptempo track. Great hard rocking number with a lot of cool twists and turns. Careful keeps the pace high and has that classic 70s organ sound but the focus is clearly on the singing as there are quite few solos on guitar or organ that are longer than 10-20 seconds in length on most of their songs. Catchy stuff.. Process of Progress starts with acoustic guitar and Caitlan singing mostly alone as the keyboards slowly become more of the sound and then a line like the Who’s you won’t get Fooled again kicks in on the organ but they quickly head off in a new powerful rocking direction. Distant Shores slows things down and Ian takes the clear lead vocal on this one. A more heavy blues rocker with a really cool middle section with an almost psychedelic section with cool guitar and organ. Tinted Windows features some more spacey keyboards than on any of the others songs as this mid-tempo rocker moves from the vocal sections (male, then female with spacey synths) to more hard rocking grooves. High Pony is probably the track they get radio play with in Canada as it is a bit more mainstream and the weakest track in my mind. Wicked Ways is the last track on this and one of my favorites. A really cool song.
They are a bit like DeWollf, Monster Truck (not as aggressive), but with a more mainstream feel. The guy who writes the promo sheet says Black Sabbath, Led Zeppelin?? Not sure what album he was listening to but not this one..  Anyway, a very sold record.

This track is not on the album but pretty cool...


https://www.facebook.com/thepublicanimal
Posted by Scott aka. Dr. Space at 2:46 AM