What a great concert bill. I showed up at 18 and the local Danish heavy band, The Hyle were just setting up to play. I met up with some Jens, Ole, Lasse, some of the guys from Doublestone, Jacob (Rising) and his wife, Daniel and others I had met at Kildemose. My friend Lone would come later.  I also hung out with Tom and the Order of Israfel guys for a bit.

The Hyle are four piece band and quite inspired by Electric Wizard and Windhand and play doom rock with a sometimes melodic edge and some cool guitar parts. Their opening track must have been over 20mins long at least and had a lot of dynamics but the doom riff was a pretty common one.  The next track started off really bluesy but then went into Doom. Not a bad young band. I could see they had a CD and vinyl for sale. 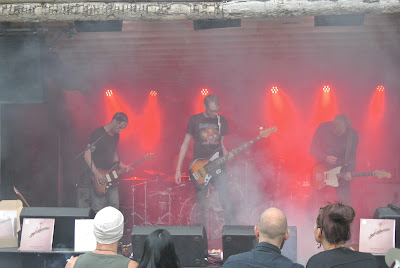 A Horrible Death for a Horrible Man, were some short haired indie rock looking guys but they played some really aggressive rock and metal stuff. They had a new vinyl record out that was laid out at the front of the stage. I was not really getting into these guys and my back was really hurting so I was moving around a lot and talking with different people. It was not the kind of music that I like much but they have a lot of powerful energy for sure.

Mos Generator and Elder guys had a lot of trouble with the van and did not arrive until nearly 20 after an 11hr drive from Oslo. They were visibly tired from that but had to quickly get the gear in and soundcheck. The Order of Israfel was supposed to start at 20:50 but they did not even start letting us in until 21:15, I think and they started about 21:30.

I had never seen my friend Tom’s band, TOOI before. They had played at Stengade and also Heavy Days in Doomtown but I had to miss both gigs. They were very tight and excellent and played all the songs off their debut record. They have finished the demo of 4 new long songs for the next record now but did not play anything new. I think the band come across better live than on the LP.  The crowd seem to really like them as well.

Mos Generator, was a new band for this tour, just Tony left from the last line up that I saw at Freak Valley. This is a great live band and they have a huge repertoire of songs to choose from but Tony said these guys only know 10 songs so they have been playing the same sets, more or less of the last 38 gigs! Drummer was a killer and intense bass playing as well.  Tony was sounding great and played great riffs and solos. I had a blast at their show. I think they played about 40mins. I picked up the European tour 7".

Set List: This is the gift of Nature, Lonely One Kenobi, On the Eve, Breaker, Electric Mountain Majesty, Step Up, ??, ??

Elder hit the stage pretty soon after Mos and the place was pretty packed. Their friend from Boston, Adrian, did some really cool projections.  The band was absolutely on fire this night and the crowd was totally into it. This was my third time seeing the band and their 2nd time in CPH (I missed the first one at Loppen). They played 3 of the songs from the new record, which I think is really great. The set was pretty long and Compendium was amazing. This is my fave track from the new record.  These guys remind me so much of Colourhaze but they do it with a different sound but the vibe you get is the same. He plays the guitar at times a lot like Stefan Koglek.. Anyway, this is a totally killer band and super nice people. IT was a fun night and Lars did a great job on the sound. Sounded fantastic.  I am not 100% sure of the set list but it was something like that. We got 2 encore songs. 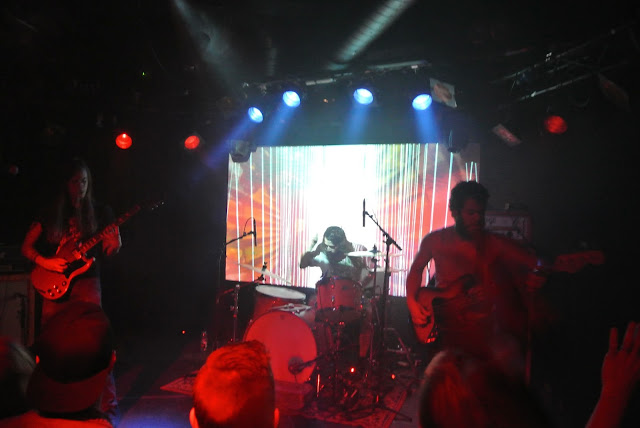