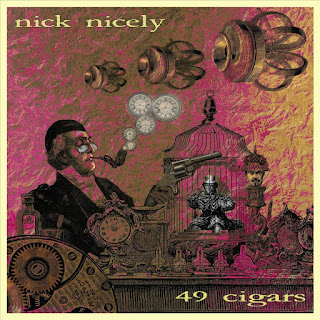 Nick Nicely was an underground UK artist in the 80s and these are archive recordings. The title track, which starts things off, was a B side of a UK psych single back in 1982. It is pretty trippy for this time period and reminds me of early Pink Floyd, Syd era.  Belinda is next is a spacey and quite psychedelic track with a lot of studio effects. Trippy. A live version of 49 cigars starts the B-side and it is nearly 6 mins, more than double the original length. It is quite noisy and far out and much more heavy and dangerous than the slicker studio version. I would say you can hardly recognize the track to start with. Very cool.  Lobster Dobbs is a short track just over 2mins long and a sort of spacey psychedelic blues number but then it is over.. like an undeveloped idea that could have gone somewhere very interesting, indeed.

http://www.fruitsdemerrecords.com
Posted by Scott aka. Dr. Space at 2:46 AM