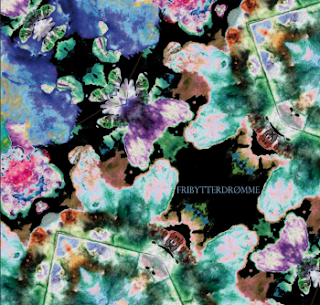 Fribyttedrømme are young new Danish band and this is their debut album. They had previously released a 7” on the Copenhagen based, Leviation Record label. I have seen the band live 3-4 times now and they are really amazing live so I was curious to see how these songs translated in the studio.  All the songs are sung in Danish. The side A starts off with De Konstuerde, which is a slow spacey track with a really nice vocal. Lau has a quite unique and cool voice. Some have compared him to the Danish singer, Stig Jørgensen. An interesting keyboard line compliments the simple guitar line. Later a more heavy fuzzed out guitar solo appears but it is slow and spacey. Kosmonauten is an uptempo rocker that really gets the crowd going live. It also has a repeated line that is easy for the Danish crowd to sing, about putting on your psychedelic glasses on! Ørken closes the side and is a slower, stoney spacey number with some cool fuzz guitar and bluesy vibe. Side B starts with Himmellegemer, which has a very groovy bass line that drives the track as it slowly picks up tempo. Nice use of the organ on this track as it comes in and out to compliment the catchy vocal parts. Fem er det Magiske Nummer is the most psychedelic track on the record and reminds me the most of Spids Nøgenhat. It is pretty hypnotic and traced out. And has a long spaced out mid section. Kviksand is the last track on the record and is more laid back and features some nice keyboards and slide guitar.  I have to say, this is an excellent album and one of the best Danish records I have heard this year. No doubt!

https://www.facebook.com/fribytterdroemme
Posted by Scott aka. Dr. Space at 8:05 AM