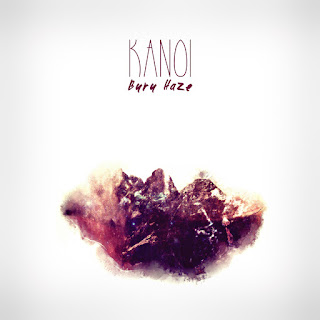 This is the 2nd album by Kanoi from Austria.  It is primarily the brainchild of Benjamin Kant Schieder. It comes in two different versions, a black vinyl and a die hard purple vinyl with a digipack CD-R and a ten page colour booklet with all the lyrics and some nice words. A very cool package.  Some of this album was recorded live. The CD starts off with Naceo II, a 8 min long track that just gets more and more spacey. The band go for a pretty raw, low if psych sound.  Buru Haze is a really slow, stoney track with some cool guitar. IT sorts of drifts into the next track called the Golden Country which is a slow growing droney piece with a very spacey synth. Windchild is a beautiful floating ballad with a slowly drifting synth and acoustic guitar. Later in the track an additional lead electric guitar is added. Song of Distance starts straight off with a guitar solo and then fades down into a more mellow floating section with some nice laid back singing and playing. Side B starts off with By the Sunrise, an acoustic track with the sound of birds and running water as the accompaniment.  Quokka sounds like it was a jam but it is quite short and still has that spacey drifting synth in the background, like on many of the tracks. It fades out and into the last long track called A new Beginning and the Sprawling Sky. A heavy guitar riff opens the track but this goes direct into an acoustic guitar and lead organ that takes the lead for a bit as the guitar solo slowly builds up before the vocals kick in.  Benjamin takes a long guitar solo in the middle and then the main theme returns, then in fades down and comes back with a long drawn out solo til the end of the record. Pretty nice music with a psychedelic spacey touch….   Fans of Lamp of the Universe will like this.

http://clostridiumrecords.de
Posted by Scott aka. Dr. Space at 7:54 AM