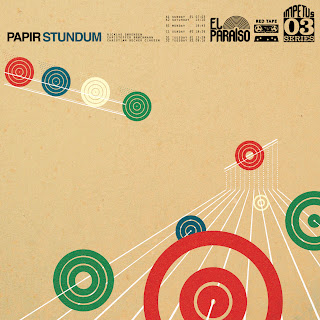 Papir are a pretty new Danish band. They have been playing around for the last couple of years and released their debut record on the Red Tape label last year. Some members of this group have also played with Øresund Space Collective in the last year as well. Anyway, the band is a very tight three piece instrumental band and this was recorded basically live with few overdubs earlier this year in a small summer house in by Jonas from Causa Sui. He also mixed and produced the record. Sunday #1 starts the album off. Saturday starts with a bit of a reggae skank before heading off into some serious wah guitar in the next section and then a heavier riff starts to build as this one really takes off over the 14mins. There is some amazing guitar soloing by Nicklas on this track. They so nicely flow from the riffs and spacey movements to the great and creative guitar sections. Great track. Monday is the entire side B of the vinyl and is 19 mins. It starts with a cool drum and bass groove and then Nicklas slowly comes in and the track really reaches a massive peak around 5½ mins with powerful bass by Christian and drums by Christoffer and ripping guitar and then it slows down and floats away for awhile with the percolator coffee machine in the spacey part. The bass effects and stuff are also really cool and then it slowly builds and Nicklas plays this beautiful guitar starting around 13mins that slowly he just blows your mind when the track really takes off again around 16½ mins. Great track. Sunday #2 is side 3 and is 18 mins long. It starts off slowly with some melodic guitar and bass, which is mixed higher than the guitar and is what really pushes the track forward and at 1:45 it shifts gears. I love the bass and drum section around 8 mins and the way Nicklas plays around the others. There are super cool bass lines in this part. The spacey section is really excellent (made by Christian, I believe). Nicklas does not really dominate much in this track leaving lots of room for the others. He comes back intensely with the wah guitar solo in the last section of another great track, Tuesday #1 this features Jonas on keyboards and some extra hand drums as this track slowly builds up with some amazing guitar keyboard parts as it stays groovy, melodic and spacey. There is a lot of great dynamics and more spacey elements in this track and it is quite different from the rest of the record. One of my favorites. Tuesday #2 ends the CD and is the shortest track at 4:40. The entire track is a spaced out drone of bass and guitar and no drums and is a very peaceful way to end the record. A very impressive release and a must have if you like adventurous instrumental music. Fans of Causa Sui, My brother the Wind, Gösta Berlings Saga, etc.. will likely enjoy this.