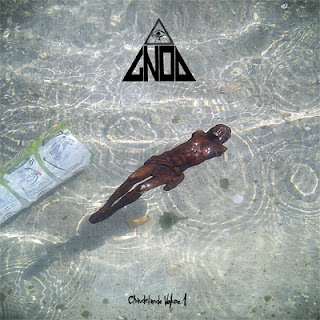 This is the latest GNOD release on right now only on vinyl. IT was recorded in when the band had some days off when they were on their failed European tour. Anyway, this is very spaced out and psychedelic as you would expect. Side A starts off with Tron and it has a pretty heavy distorted guitar riff and spaced out sounds swirling around in the background before the vocal with a lot of delay kicks in. A very cool catchy hypnotic distorted track. Visions of Load is next it reminds me a lot to start of the opening track by the Spacious Mind on Garden of a well Fed Hed but the organ is not as tripped out. This one has a really nice floating feeling to it as you just glide along. Side B is one long mind fuck called The Vertical Dead. It starts off really cool with some samples and a Pink Floyd vibe and then slowly descends into madness with some intense slide guitar and heavy riffs and spoken word vocals often with some cool effects as it builds in a sort of BONG like way. A cool and totally spaced out track with a very repetitive line running through it and very low fit rashly drums as the vocal really spaces you out to the max as the intensity just builds. A very spaced out and extremely cool record.

http://www.tamedrecords.com http://ingnodwetrust.tumblr.com/
Posted by Scott aka. Dr. Space at 6:51 AM