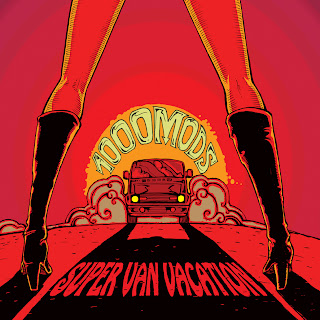 1000Mods is a new four piece Greek band playing jamming stoner rock. The record was produced and engineered by the famous Billy Anderson (Porn). This double vinyl edition also sounds great and has super cool artwork by the Italian Malleus art collective. The band had previously released a 7” on Suisound in . Anyway, this record starts off with Road to Burn, which starts off slowly then a cool groove. Seven Flies is a really cool track and El Rollito starts with a fast guitar and then the groove just kicks in. This one you have to crank up even though it is a short track. Set you Free Dani sings a bit more like John Garcia in this hard hitting track. Vidage is a slow and melodic groove and is a bit more bluesy. This is one of the stand out tracks with some nice guitar solos as well. Navy in is a heading into a more psychedelic way and is a great number. Track me continues in a more psychedelic vein with more lead guitar work as well and Dani uses some effects on his voice. Johny’s is a slower more stoney track. Abell 1835 has a brant bjork style groove in a slow cool way. The title track ends the record and is also a more laid back to start and the John Garcia style vocal comes back. Some cool psyched out guitar parts also. A very cool stoner rock record from .