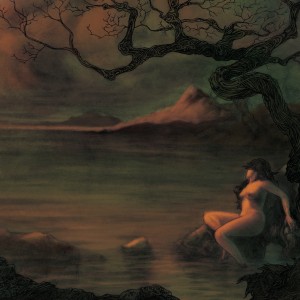 Elder are back with their 2nd double record in 3 years. Again they have quite cool artwork and very long songs with a lot of cool passages. This album had been getting really good reviews but I needed to make my own opinion up by spinning it several times, the last time loud! This kind of music needs to be loud. Side A starts with Gemini which has a heavy down tuned riff to start then a great lead guitar part and then it changes totally and goes more melodic and the guitar gets a bit more psyched out with a some cool delays. The title track is next and is a slow evolving monster of a track with some nice melodic stuff that reminds me of Colour Haze. Then they go into the slower heavy riff section and the vocals begin. Fantastic melodic guitar in the next section. Great track. Side III is next and is again one long track called Knot. It starts as a very melodic mid paced track It slows down and some cool wah guitar accompanies this down tempo part, which heads into a more repetitive riffing part that did not hold my interest that much until the end when he plays some really cool guitar but damn he waited a long time! Drumming is great and intense as well and steady heavy bass as well. III is a bit Colour haze inspired instrumental to start and is primarily acoustic and has a very cool vibe with some hand drums and wind to add to the ambience and has some great melodic guitar soloing in this track. The track called the End finishes off the record it has a quite heavy groove. While people have described this as a psychedelic rock record, I would not at all say it was. It is a very good solid 2nd record and has some impressive musical passages that I enjoyed a lot but it is not psychedelic. Cool record.

http://www.meteorcity.com
Posted by Scott aka. Dr. Space at 6:54 AM