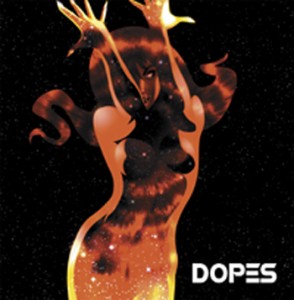 This is the new Monster Magnet 10” with re-recordings of three tracks from the Dopes to Infinity record. For now, you can only buy it on the tour (they pressed 1000 copies). It was also the most expensive 10” I ever bought at 150kr (20€, $30). I think that is just too much but they are on tour and trying to make some cash. It is in some mail order places for a bit less if you look around (Kozmik Artifactz). Like the other 10” they sold two years ago that is sold out now, these tracks were recorded at Phil, the guitar players, home studio and they are more low fi and psychedelic than the original versions. All Friends and Kingdom Come starts things off and this is not slowed down compared to the original but the vocal is more psychedelic. The bass line is really cool and they have some nice guitar psych out as well. King of Mars is really different with acoustic guitar, long delays on the voice and cool space sounds. Dave’s singing sounds awesome. This is a very cool psych version and the best song on this EP. Flip the record over and a new version of Dopes to Infinity! This is a slower stoned acoustic blues version to start but then some electric guitars kick in. This one is pretty close to the original but everything is slowed down and more spacey sounding, even the Ed Mundell guitar solo is followed pretty closely but slower and more low fi sound. Cool stuff. If they would only make a full record of new stuff with this vibe and not so clean and produced. We can hope.

http://www.zodiaclung.com
Posted by Scott aka. Dr. Space at 6:44 AM