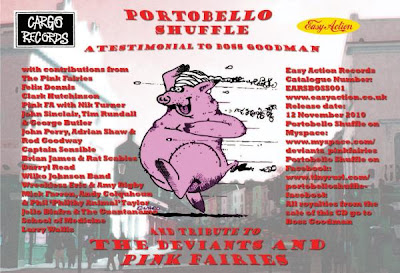 This compilation CD came out to raise some money for Boss Goodman, who was the roadie, manager and 5th member of the Deviants and Pink Faires. He suffered a stroke back in 2006 and has not been able to work the way he used to so his old friend, felt they owed him a debt and did a benefit gig as well as put together this special CD. The CD features a lot of famous underground people on the 15 tracks. The very first track is a surprise as this is the original Pink Faries line up that recorded their classic early 70s records with Paul Rudolph on guitar. He has not played with anyone in many many years and they still have the energy, with a rerecorded version of their classic, Do it! Felix Dennis Felix has tracks (2nd and 15th tracks, one is a spoken word piece). I was really surprised by the Clark Hutchinson track, Rambling Back transit Blues, the old Deviants song. A strange group of folks calling themselves Pink FA doing a psychedelic version of Uncle Harry’s Last Freakout and Nik Turner joins in to blow some sax as well.  John Sinclair and Slim Tim Slide play the Farren track, People call you Crazy. I don’t care for the sound production on this one. I generally like the stuff that Rod Goodway and Adrian Shaw do but this version of Half Price Drinks, is ok for the first half but then Rod just says the same thing over and over and over for what seems like minutes while the track goes nowhere. A very nice mix by though with a lot of cool instruments mixed in. Captain Sensible bring back some energy and turn the Pink Faries song, Say you love me into a KISS song! Pretty cool. Rat Scabies play a frantic version of Teenage Rebel. Darryl Read (I don’t know who he is but I found out- early punk with his band Crushed ) play Somewhere to Go and do a cool quite true to the original vibe version, except the more modern sound. Willie Johnson band play the CD title track as a standard blues song. Wreckless Eric does a laid back version of the Larry Wallis track, I wish I was a girl. Mick Farren performing Baby Pink is quite a strange one. The Jello Biafra track is a really cool psychedelic track. One of the best songs on the compilation and also the longest. Larry Wallis is next with a terrible track with programmed drums, and cheesy keyboards. Its nice to hear the guitar solo and passionate vocals but the basic track is crap. Overall this is a really cool compilation CD and for a good cause.
http://easyaction.co.uk
Posted by Scott aka. Dr. Space at 10:05 AM