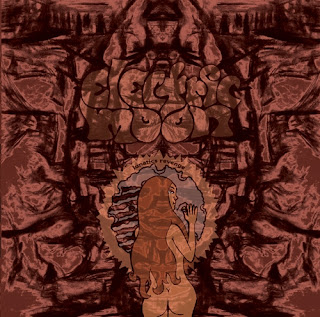 Sula Bassana and Lulu are back with another Electric Moon release, their third in a year. Again Lulu has made the cool album artwork and played the bass. Dave also plays the keyboards, which are very prominent on the great opening track, Gefaehrliche Planetengirls, which was the first track on the CD (and not on the first vinyl record). Lunatic was the 2nd track on the CD and now appears on vinyl. I already reviewed these tracks in my full review of the debut record (link). So onto the new tracks, which starts with D-Tune, which is an 18 min track. Sula has never really played this kind of heavy psych guitar before and he really plays some heavy riffs and cool effects as the sort of trance builds up as Lulu thumps along in E and Pablo keeps a steady flow for Sula to explore the guitar cosmos of the world. An excellent track. It reminds me of White Hills at times and Lulu does some spacey spoken word stuff as well. Landing is a 5 min piece where Sulu plays two layers of beautiful guitar and some space sounds, there is no drums on this track. A lovely track. If you get both vinyl records, you can have all the Electric Moon stuff on vinyl now and two new songs not on CD. Nice.
http://www.myspace.com/electricmoons http://www.nasoni-records.com
Posted by Scott aka. Dr. Space at 3:55 AM