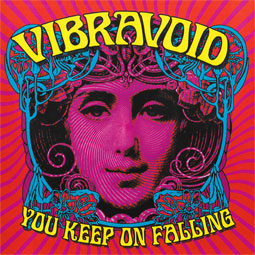 This is the latest limited edition release by Vibravoid. It is released in association with the Greek psych magazine Gew Gaw. It comes in black, green and purple swirl vinyl. The title track is a 33RPM 5½ min pretty psyched out track with a repetitive vocal, highly distorted up front guitar with the drums almost not there at all. It is pretty mind heavy stuff. I guess this is a taste of what the new record they will release in May called Mind Drugs will be like?  The B side is two live tracks from October 2010. Vivid Vision and Christmas on Earth, which have been standard in the bands live set for some time now. Cool 7” release.
http://www.gew-gaw-fanzine.gr http://www.vibravoid.com
Posted by Scott aka. Dr. Space at 1:27 PM