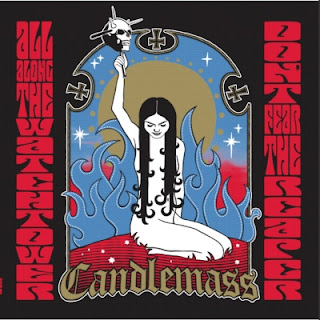 This is a very limited edition two track 12” by the amazing Candlemass. It is pressed on bright green vinyl in 250 copies and 100 copies on black vinyl. I am not sure if there is another pressing in blood red vinyl as the band was selling this at their show in December to celebrate 25 years. Looks great. Side A starts with the bands take on the Dylan classic, All along the Watchtower. They play an uptempo version with some nice guitar by Lars. Not much more to say about this one except it will surprise you. I really like their version of late 70’s Blue Oyster Cult classic, Don’t fear the Reaper a lot. They have slowed this one down a lot and it sounds really cool and doomy and spacey at this speed. The vocals are fantastic. Good luck finding one of these as I think they sold out very quickly. High Roller Records is releasing a lot of really cool stuff.
http://www.candlemass.se http://www.high-roller-records.de
Posted by Scott aka. Dr. Space at 8:30 AM