Dragontears- Turn on Tune In Fuck off (Bad Afro AFROLP040) 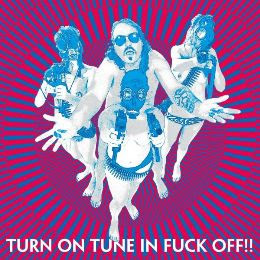 Lorenzo and the old On Trial guys are having a great time with this side band to their other main bands. This is the 3rd record in 3 years and it is more psychedelic than the last record and also has some pretty cool artwork. The first 500 copies of the vinyl come with a free 7” record with two additional tracks. The LP starts off with the 60’s space rock track Two Tongue Talk. Really cool reverb guitar, farfisa, spaced vocals and a great bouncing bass line combined with space synth sounds makes for a killer track. No Salvation has a long spacey guitar intro and Guf’s vocals have never sounded better. I am not a big fan of the falsetto backing vocals that are used on this track but the rest is great and the lead guitars on the record are great. My Friend starts off with some acoustic guitar and space sounds and is a nice ballad track. Time of no Time will really remind people of Wooden Shjips with is hypnotic bass line. Side B is very psychedelic and starts with William, dedicated to William Skotte Olsen, a very special Danish artist how died in 2005. It is also very psychedelic 10min + track. Very spaced out and trippy mind stuff. The LP ends with Mennesketvilling (Human Twin), and I don’t think it is any relation to the old On Trial song of the same title. It is sung in Danish so might remember some people of Spids Nøgenhat, which most of the same folks as Dragontears. The 7”, for those lucky enough to get a copy is two more uptempo songs. Not as cool as the track on the rare RepoMan 7” but still solid tracks. Another really cool record.
http://www.myspace.com/dragontears2000 http://www.badafro.dk
Posted by Scott aka. Dr. Space at 10:56 AM