Place of Skulls- As a Dog returns (Giddy Up Records) 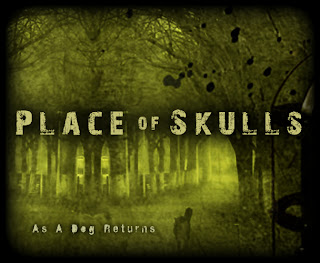 We just saw Victor and his band, Place of Skulls, play a great concert at Loppen in . They had some copies of this new CD, which is not officially out until Jan for sale so I bought one. I really liked the last CD, The Black is never Far. This new one has some really great material on it but also some tracks that I just skip due to the strong religious nature of the material. The band is now a Christian band and the lyrics are inspired by many specifically cited bible passages on the lyric page. Anyway, if we get away from the religious nature of the band, the music has a lot to give. Victor’s vocals are excellent and very passionate and he plays some very cool guitar and awesome riffs. The opening track is a heavy one and has a very cool guitar solo with some special effects. Breath of Life is a slow, heavy melodic track and beautiful music. Though he slay Me is an acoustic song about Victor and Jesus and I skip this one. Psalms is another very religious track but it has a cool laid back vibe with some conga drums and a slow dreamy way about it. Too religious.. Dayspring brings starts as a slow heavy blues vibe but slowly builds up and changes in this quite long track. Timeless Hearts (one of the ones they played live) and also nearly 8 mins and after the harmonica part a killer riff kicks in. Amazing song. He’s God is another slower GOD ballad but it gets quite heavy. Desperation (old Steppenwolf song) starts with some organ but the band does a good solid version. The CD ends with the title track, which starts slowly but Victor pulls out another monster riff and a cool doomy groove takes over. There is a lot of great and melodic heartfelt music here but I will probably not play this one so often due to the lyrics. I think this will turn off many people as well.
http://www.placeofskulls.com
Posted by Scott aka. Dr. Space at 11:02 AM