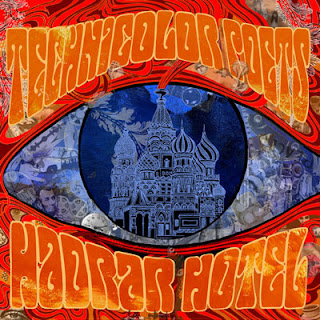 Technicolor Poets are a new psychedelic rock band from Malmö . This is their debut release and it features some really excellent 60’s style dreamy stoned songs. This record was recorded in one day in August 2010. The sound of the recording is like they are in a big room and it helps to give it a more old school 60s sound but I think the sound is a bit too clean. Ketama starts things off.  This is a slow building track with a nice vocal and later the dual guitars get to psych out as the track picks up and reminds me a bit of Mandragora lightshow society. Three hours from your Garden is a slow track and I really like the vocal delivery on this one and nice bouncy bass line. The reverb guitar solo is cool. Hadar Hotel Part 1 ends side A and is a more intense track with a sort of eastern style guitar soloing. Astral Plane starts off side B, and is a bit eastern leaning psych with some hand drums, eastern scaled guitar lines (no sitar). Cool vocals and a really great laid back song. Hadar Hotel Part 2 takes up the rest of the album side. IT is a slow building track with some spoken words parts. Very cool stuff. This is a very ambitious record from some kids barely or under 20 years of age. Impressed.. Good work guys.
http://www.motljud.com http://www.myspace.com/bisonspipe
Posted by Scott aka. Dr. Space at 11:18 AM