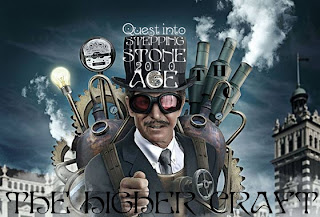 This is the Higher Craft’s 3rd release and a sort of teaser for the next full length record due out next year called Quest into the Stepping Stone Age.My scanner is down and I can't find the cover artwork anywhere on the net so I used the image for their new record, that is not yet out. Gateway starts things off. It is a melodic, dreamy psych rocker that gradually picks up pace and the acoustic guitars fade and the electric come more to the front. Some spacey sounds also fill out the background. It really picks up at the end and is quite psychedelic. Oracle is next and a fast paced 3½ min psychedelic rocker. The sound is very different from the first song and sounds like it is from a live performance. The band really plays fast on sort of chaotic track. Crimson Sky has a very psychedelic start and then the acoustic guitars kick in. The vocals are very ethereal and then the track really develops with some great guitar playing. Inner Realm, is 5½ mins and the last track on the CD. IT also features some really cool guitar playing. This is a very good new psychedelic rock band and they feature a really nice female singer with a lot of personality. I look forward to the new record very much.
http://www.thehighercraft.com
Posted by Scott aka. Dr. Space at 11:00 AM