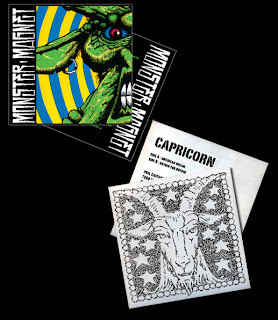 Studio 13 is a new label formed by Monster Magnet members Phil and Dave. This is the first release and a new band by Phil with one of the guys from . It is very Motorhead inspired but like slowed down a bit. The 7 features 2 tracks. American Dream starts off with that Lemmy like Rickenbacker sound and reminds me a bit of Dead man tells no Tales before they kick into a dirty rocker with a quite low fi, raw production. The b-side features, Nothin’ for Nothin’ and it has a guitar riff and groove that reminds me a lot of Step Down from Bomber. Phil plays guitar, bass and sings, Todd Youth plays guitars and bass and Karl Rosqvist plays the drums. This is only pressed in 100 copies and available only on the Monster Magnet Mastermind European tour dates. I doubt they have any left when they get back if they do they said they would sell them on the Monster Magnet web shop. I dig both the songs and look forward to them making more stuff. Phil said they would have another release in 2011.
Monster Magnet- Superjudge 10” (Studio 13)
The band on this release is Bob (from Monster Magnet, Atomic Bitchwax, and Riotgod) on drums, Phil (Monster Magnet, Capricorn) on lead guitar, bass and Dave playing guitar and singing. They have rerecorded a super cool version of Superjudge and an unreleased song called She digs that Hole (a song from the new record Mastermind has a similar title but has no relation to this song, which has totally different lyrics). The version of Superjudge is very cool and laid back and quite psychedelic. It has this hypnotic low fi groove of bass, drums with the shaker and Dave just laying down the dirty blues psych out version. She digs that whole starts very bluesy and slow but then it kicks in gets pretty psyched out at the end. There is like a Tom Waits meets Monster Magnet vibe on both tracks and this is not at all highly produced like the standard MM records. Really cool stuff. This one is pressed in 500 copies. It will for sure be one of those collectors items.
http://www.zodiaclung.com/category/studio-13/

Here is also an excellent interview with Dave... http://www.zodiaclung.com/2010/10/the-obelisk-interview-with-dave-wyndorf/