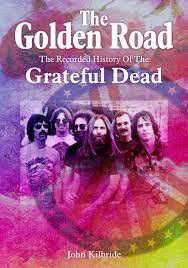 I am not the biggest Grateful Dead fan but I had a huge respect for all the groundbreaking work the band did with improvisation, different set lists every night, sound systems, establishing that it was ok to record bands and setting up the first taper sections, etc…    As this book also includes live recordings you can image it is quite massive!!!  344 pages and by far the largest of any book I have seen published on Sonic Bond Publishing. The first 187 pages include the introduction which explains a lot about how they approached this book and other details. Then they take the band year by year starting with 1965 up to 1995, when Jerry Garcia died.

The first Appendix goes into details on the Live and Studio releases year by year and fills up the next 13 pages and is basically a list of who played on it, where and when it was recorded and all the songs and who is credited for writing them in a list format.  Appendix 2 is Archive releases in order of recording date and as you would expect this list is massive, about 100 pages long and again in pretty much the same sort of format. The 3rd appendix is Collections with unreleased material from different years. A lot of this is just a show listing and set list after the first few listings. The 4th Appendix is compilation albums and the final appendix is a list of significant solo albums…   These appendices are very useful for the real collector by not that interesting for the casual GD fan. The first 187 pages is the real book if you really want to learn about the GDs music. John is incredibly well researched and while I have only read one book on the dead by the roadie Steve Parish, who was also Jerry´s personal assistant and manager, there is a lot of interesting stuff in this book.. Really pretty cool.. There is a small section with some pictures, mostly of album covers but also of the band. Probably most of these have appeared elsewhere.   Great book. I really enjoyed reading it a lot.