St. Kraut is a Russian band that Keith discovered via Carry Munter in Holland who has a wonder review blog (and had a great radio show as well). This band had one track on a sampler but Keith really dug them and it turns out they had released 3 albums since 2020 and he decided to just put them all out in a 3CD fold out package..  These jams were actually recorded back in 2017. The band is a trio of Alexandr on Guitar and Synth, Mikhail on Pads, Guitar, Drums and Synth and Evgenil on Bass, Guitar and Synth. 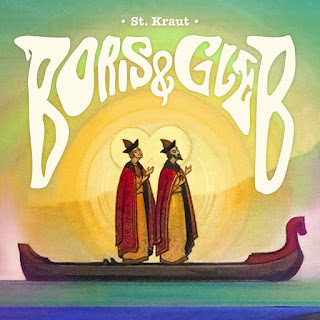 The first CD is called Boris & Gleb and features 5 tracks ranging from 3:39 to over 23mins. Only track 3 is less than 10! Inner Alter starts things off very slowly with a repetitive bass and guitar line as some light synths in the background. It is pretty relaxed for the entire 15mins. The Himalayas starts to get some energy with some drums, more spaced out synths and a higher tempo. Quite spacey stuff. By the 3rd track you are really wanting some thing more energetic and they raise tempo but the drums are poorly mixed (I think) but the bass grooves and the rest of the band spaces out…. Mishiva is about 10mins and returns to this very relaxed sound. The last track on the CD, Tropic Slumber is mainly like hand drums and some guitar notes with long delays for quite some time before anything else happens much. THis space out is 23mins long. I did not find this album to be very exciting and or hold my attention that much. 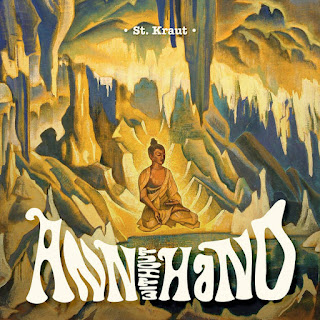 The 2nd CD Ann without Hand features 6 tracks and is not as long with shorter tracks. The title track starts with a motorik beat with some guitar mixed quite loud compared to the rest of the instruments. Give the track a strange feeling.  The guitar goes into a more solo like mode eventually but is just too loud as the band sound like they are playing in another room???  Midnight Whispers starts a bit bluesy and has a long spacey delay guitar solo over the slow building drums.  Ann without Head is supposed to be but I think this is actually Aerial Whales as the timing fits. Anyway, it starts with some synths and spacey sounds.  Eventually the guitar played with effects becomes the predominant instrument. 3 excess Shots gives this album a bit more of a shot of energy as well with a more uptempo track with some spaced out guitars on the top. This is probably Ann without Head. Starts with some simple drums and guitar. A few other sounds enter here and there to try to make it more interesting.. The last track is called Lucid Dreams Exchange and features some mid paced drums and guitar noodling over the top for a long time.. Track is 13mins.. Not enough really happens on a lot of these tracks. 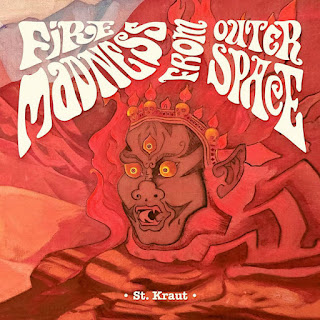 The 3rd CD is called Fire Madness from Outer Space and I had high hopes this would be better than the other two which I have found not to be that interesting in the end. Sorry guys… the opening synth and drum track is a short interlude to Worship at the Gates of Night, which visits quite similar these to a lot of the other tracks but has more synths. Fire Maidens from Outer Space is one of the more interesting tracks with an intense atmosphere of noise (probably from the guest Kirill) while the guitar noodles about over the top and the drums keep a steady beat. Subconscious Ride starts with a synth drone and bass guitar. The drums slowly fade up and a sax like sound but I think it is guitar actually. The sequenced synth is somehow a bit off kilter from the rest of the track giving it this disturbing feeling. Later the guitar takes over nearly all.  The title track is next with the return of the motorik beat and synths and bass before the guitar kicks in.  Including what is probably the first real synth solo on the CD. Nice surprise.. Eventually the guitar comes and drowns the synth away for a while but then the synths come back to dominate once again. One of the best tracks on the 3 CDs.  The final track, Everything will be fine while this music plays, closes this 3hrs of music.. Wow… While I was not that fond of a lot of it, I think some people will really dig this a lot…  Just check it out… You can stream their albums on bandcamp.  Cool artwork..