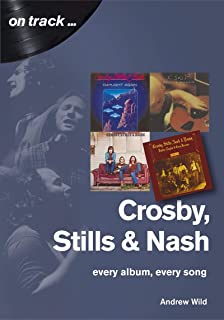 It took me a while to read this one but damn, this is a pretty interesting book and if you are a fan of CSN, I would be very surprised if you did not learn a lot!! There is a huge amount of new information and details I had never read anywhere else and I own almost all their albums and most of their solo albums as well!! The author, Andrew Wild, has done an impressive amount of research.

The book starts with a timeline of what the members were up to pre-CSN. July 1968 at either Mama Cass or Joni´s house, was the first time they ever sang together!! As the band did multiple takes and recorded many songs not included on the albums for each session, these are also described in detail. Many were released on later reissues but some have remained totally unreleased to this day. I would love to hear the instrumental version of Cinnamon Girl that they recorded but has never been released!  The section called Other live tracks: 1969-1970, is very interesting as it mentions a lot of live recordings that exist of the band from this time period and some material that is on you tube!!