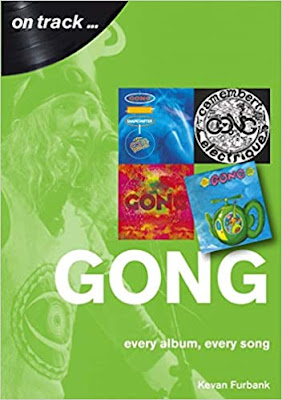 This could be a challenging book to write in some ways as there were so many versions of GONG and do you cover all of them or just the “real” GONG- GONG, Pierre Morlen’s GONG, NY GONG, Mother GONG, Paragong, Planet GONG…..  Well, the author, Kevan Furbank, has opted to only cover the albums by the band called GONG. All the other versions are discussed but in just a few pages at the back of the book.

My favourite era of GONG is like most people 1971-1974- The Trilogy era and if you have read some other books on GONG, you might already know a lot of the details that are discussed before he goes into depth about each and every track and what key it was played it and many other details that I did not know. In recent years deluxe versions of the many albums have been embellished with extra tracks and he spends quite a bit of text going into details about these extra tracks or outtake versions, etc.. I found that very interesting as I don’t have all these versions.

After Expresso II in 1978, there were no official band releases until the 1992 Shapeshifter album, which would bring together some of the original members (David, Didier, Gilli, Mike as well as folks from the Here and Now band. I got to see them twice in 1995 and it was a great tour with David, Gilli, Mike, Steffi, and Pip.. The next studio record was not until 2000 though.  After the discussion of Zero to Infinity, there is a large picture gallery of album covers and rare photos of the band.

I should mention that all the different live albums are not discussed in detail in the book and pretty much only Live etc.. in detail.  As mentioned before, Pierre Morlens GONG and Mother GONG get about 5 pages or so each and then a lot but not all the other GONG related records are listed and some discussed in more details than others.  Too discuss all of it would make the book twice the size as GONG has had many members and solo projects, etc..

Anyway, I enjoyed the book a lot it made me want to go back and hear some GONG! If you are a fan, you will for sure learn a lot.  I did…