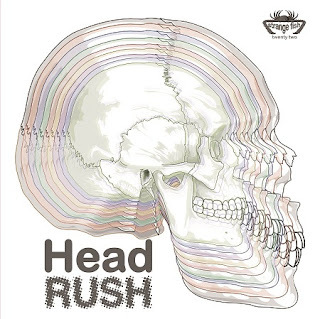 Fruits is back with another monster compilation record (triple LP and bonus CD set). This follows the Krautrock path that the 2012 compilation called Head Music started.  It features some of labels fave artists like Jay Tausing, Moon Goose, Icarus Peel,  but mostly it is a lot of new artists, which is cool. Including my friend Vince Corey (has both a solo track and one with his group Sonic Trip Project. CD1 starts with Giacomo & Carolina and a track called  Sunrise, part 7. It has some deep bass and a melodic synth line and drums. This plays a repeated riff and then starts to diversify.  Happy music. Silver Vials kick the energy up a bit with Follow the Sun. Neu like. The vocal is quite spacey. Nice track. Das Blaue Palais, also go for a Neu like groove with their track Zeitfeld. Spacey synths, some nice pause sections and then off we go again. Some guitar becomes more dominant later, which was great.. The Love Explosion perform one of the shorter tracks (4mins) called Anarchy! It starts with acoustic guitar and is pretty melodic. David Oakes (the Sahara) is a slow synth and drum machine track. Slowly more layers are added and it maintains a sort of dark feeling to it. This track becomes really cool later on with a sort of desert feeling when the guitar takes the lead. Sonic Trip Project do a long track called Getaway, which also has this same Neu drum groove that is very popular. The track focuses on the synth to start and then Vince comes in with his guitar but no solos on this track, which is just riff city for 10mins! Spacey end. Moon Goose lay down a track called Shiny Man. This has a strange highly effected voice and is quite rocking for the first 2.5 mins and then it spaces out and returns to the rock! Oslo Tapes starts with a kick drum and then the synth drone kicks in and vocoder voice speaks… Obsession is the Mother of it All. The beat becomes more techno like as the drone starts to really pulsate and some bells are thrown in to fuck with your head as they repeat the same words over and over.  Drums get more complex after 1.5 mins. I got pretty sucked into this one. Jay Tausig ends the CD with Ecstatic Engines. Lovely lead synth playing on this one and sounds like real drums and not programmed. Jay is a musical genius. So creative. Great of course.

CD2 (Sides 4-6) features longer tracks and starts off with Sons of Ohm.  Telefunken Baby, has some analog synth bubbles as the guitar line slowly fades up and off we go. While the guitar line remains much the same, the synths lead the way with bubbles and smooth pads, and solos. Alber Jupiter starts off with a bass line and then the Neu drums kick in. This one is super repetitive with the drums and bass. Guitars are quite nice after a bit. Just go with the flow… The Lost Stoned Pandas created a track that starts with a sample called Motorik Wah Nine, and yes.. features a lot of wah guitar. The drums are thin and weak in the sound, which is a pity as this track could have had some balls. It is all about the wah guitar on this one!! Great track and I got totally sucked into the groove. Motorik are next with a track called Tyrants!  Very repetitive groove so focus on the guitar or you go crazy. Some nice heavier guitars mix things up about 4mins in. This sort of Neu groove is very popular on this compilation. Culto al Qondor from Peru stat off spacey, then the bass line starts, then the kick drum and delay guitar and off we go with a very long repeated section before a lot starts to change very subtly. Slowly a spaced out voice is used to create some psychedelic atmospheres as you get drawn into the madness. The rhythm and beat is quite the same for a very long time but then drums start to throw in little fills here and there to mix it up. Cool stuff. Psychic Lemon close out side 6 or CD2 with one called Jam 7. The Neu rhythm is running in the background under a slowly developing flange guitar line.  Quite hypnotic..