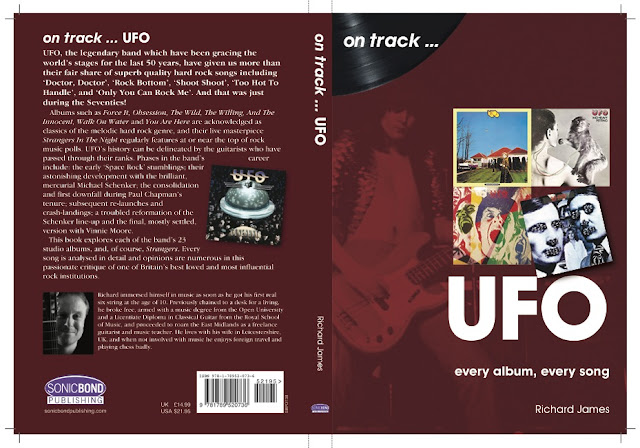 UFO is one of my favourite 70s bands and I loved them in the early 80s when I first got to see them live quite a few times in 1981-1986.  I was really looking forward to read this book.  It was totally taken by surprise by how much the author (Richard James) hates the first three albums. I really dig them and the playing is great. The fact that Mick Bolton is more blues based and not as complex player as Schenker, puts him in the bottom ranks according to the author. I have a lot of friends who the first 3 UFO albums are the best because they are a bit spacey, psychedelic and raw jamming rock music. Pete Way and Andy Parker are also incredible with some great grooves and killer bass lines.  Anyway… if you like the early UFO, you will hate this part of the book. He does not really give them a chance.. all pretty negative stuff.

The Schenker era is covered most thoroughly, as would be expected.  It was nice to see the extra tracks from the deluxe editions discussed in details. Despite owning all the UFO LPS or CDs, I don’t have these remasters with the extra tracks so I have never heard some of the rare tracks like (Give her the Gun, Sweet Little Thing, 16 from Phenomenon era (2 of these were released on a 7”), A million Miles (Force It). See the video below.

NO Heavy Petting is one of my favourite UFO albums and I was surprised that there were 5 unreleased tracks from this recording session, the only one with keyboard player Danny Peyronel.  All Or Nothing’ (Marriot/Lane- Small Faces), Have You Seen Me Lately Joan’ (Frankie Miller), French Kisses’ (UFO), Do It If You Can’ (UFO), All The Strings (Peyronel).  There were no extra tracks from Lights Out or Obsession.

The Strangers in the Night section is very interesting as well as the recent large box set with all shows was released. The details about how Mother Mary and This Kids were actually completely recorded in the studio with dubbed audience was interesting to find more about.  I was surprised that it was not discussed what Pete Way said in his book, as he claims that he redid almost all of this bass and Schenker did many lead overdubs and most of the vocals were redone in the studio as well.  I know this is considered one of the best live albums ever like Thin Lizzy Live and Dangerous but neither are totally live albums since so much of it was redone in the studio.  Anyway, Richard goes through all 8 concerts and gives some details about what is different from each show, very little actually.

As you head into the 80s there is a section with a lot of the album covers and some nice pictures of different eras of the band as well.  This was when I saw the band quite a bit (1981-1982- 4x).  I loved Mechanix and a lot of Wild Willing and the Innocent!  From 1983 (Making Contact) through most of the 80s was a tough time for UFO, as it was all down hill. Headline act in 10,000 people arenas to playing in bars and clubs again but 1985-86.  The studio albums were very patchy as well. By Misdemeanour in 1985, Phil Moog was the only original member left in the band!!

Schenker actually came back and made 3 more records with the band with Walk on Water being my favourite one.  These are described well.  The next era is one of a lot more stability with Vinnie Moore, who has been a constant in the band for nearly 20 years now. A lot of good hard rocking albums have been made and each tour, a few of these songs are showcased but sadly, the band for the last 40 years has mostly played the same concert every night with a few token tracks from whatever was the latest record and then just selections from Strangers in the Night, with only a few exceptions.

Richard, is pretty critical and not as kind or fair as many of the authors of these books and injects a lot of his own personal less objective opinions. Some people might not like this but otherwise, this is a very informative book about one of the best hard rock bands of the 70s!!   Enjoy.. Fun book.