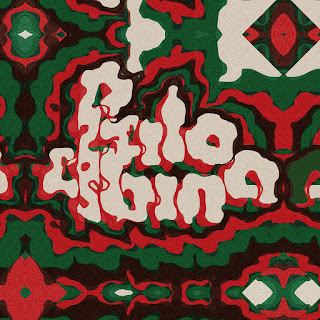 This is a new psychedelic rock band that Christian from Samsara Blues Experiment discovered when he played in Brazil last year, along with Necro. This band is from Rio de Janeiro. They are an instrumental trio featuring: Alex Sheeny on guitar/synth, Lucas Loureiro on drums/percussion and Rodrigo Toscano on bass.  This track starts with a 7 min song called 2069. The recording is a bit raw when it comes to the drums but man the bass playing really kills it on this track, giving Alex a lot of space to explore on the guitar and solo, take interesting new avenues as the track just keeps rocking. Galho starts off quite noisy before the first notes of the bass kicks in and the track starts to take form, a dark theme starts to emerge. Later on we get some great dual lead guitar solos one panned to each side that takes us to the end of the track. Cool stuff. Supernova 3333 is the 2nd shortest track and reminds me a bit of Radio Moscow with the start stop rhythm and ripping lead guitar in between. Intense playing from all.  Na selva densa steals a guitar line from some song that I can’t place (at the beginning of the song) but it is more melodic this track but also features a lot of lead guitar soloing. The later riff reminds me of Captain Beyond! The end part has a nice percussion jam through in. Psilocibina starts with just guitar played in a sort of Eastern like scale. The lead line is a quite happy one as the bass also takes a lead and the drums are slowly building. A nice more relaxed song to start but then they kick into high gear once again. Trópicos is a short 2min track that leads into the LP closer, LSD. This is the most psychedelic of the tracks with some great playing and exploration by the band but also some bluesy riff rock and solos. Great energy. Pretty cool record. Only pressed in 300 on vinyl copies. Get it now!