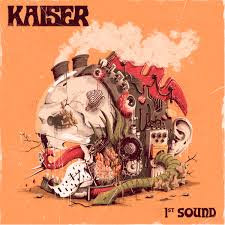 This is the debut by the Finnish band, Kaiser. Already 29 bands with this name in Discogs but why not! The band is a stoner rock trio and they for sure know how to rock, stoner style. High Octane Supersoul starts off with some heavy and spaced out stuff before kicking into the groove, ala. Dozer with some powerful vocals. He can be a bit forced and angry at times as well. Desert Eye mixes in some very low fi stuff at the start and different parts of the song and then kicks in hard and fast. The occasional Kyuss sound leaks through here and there. A spoken word section is added briefly before a very heavy section. We bleed for This (See official video below) slows things down but the vocal is very intense and the bass heavy and fuzzed out. Later it really rocks out though. The solo section is very psychedelic and freaked out. Cool effects on the guitar. Voldmaster has a very heavy almost doomy riff, but quite hard hitting. It speeds up and then comes down again with a short slow stoney guitar solo. It closes with powerful vocals and a doomy end. Ouroboras ends side A and is more old school stoner rock but features some of the best guitar work on this side. Great solo section but too short. Side B starts off with Intermission, a bass guitar piece with a dark evil mood and feel to it before a spoken word that kicks into the very doomy and heavy Earthquake! Powerful stuff.  Very slow to start but fast and heavy at the end with a cool phased out sound. Fuzz of Fury fades in from the end and keeps the mid paced stoner rock rolling. King of Horizon has a more screamy vocal, another sample from a movie and a mix of doom and nasty heavy shit! Galactic Crusade is the final track on this very intense record. Phew… Don’t play too LOUD, could really damage your relationship with your friends and neighbors!