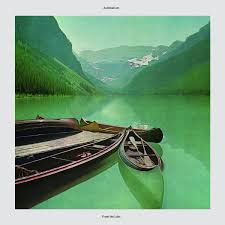 Automatism is a sort of Kungens Man offshoot you could say as it features guitarist Hans Hjelm and bass player Mikael Tuominen. Jonas Yrlid plays the drums and Gustav Nygren the other guitar. Andreas is credited for percussion and Jesper Skarin on drums (tracks 3,4 and 6) also. Peter Erikson plays the synths. The guys got together in the studio and just jammed it out live and then did some overdubs and what you end up with 6 tracks ranging from a bit over 2mins to nearly 13mins in length. The album starts off with the 12min track Standing Wave. It fades up and a nice groove is going with the two guitars interweaving melodic solos and exchanging riffs here and there. Some nice spaced out sounds here and there by Peter keeping the track from being normal. Great grooving space rock.  At Sea starts with a nice bass line over which the main lead guitar line glides. Very nice and spacey. October Swim is a very short track just over 2mins, like a small piece of a jam where they only liked this part as it fades up and then out again. Nice vibe. Propeller Propulsion is a hypnotic one, very Neu, CAN inspired. Great driving music. Floating Downstream has a bit of an eastern flavour to it especially the guitar lines. A nice mysterious vibe as well. The ends with the 4min track, Ice Flows has a programmed drum which is quite different. There is a special effect on one of the guitars that makes it have a psychedelic feel. Great record guys. I really like it a lot.