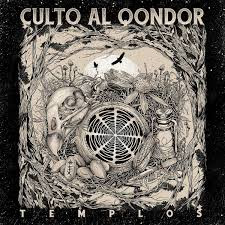 This is an old band that has begun a new life and is lead by Chino (La ira da Dios, 311) and features members of Serpentine Satellite as well. They originally formed way back in 2002-2005 as Qondor. They are a trio and play instrumental psychedelic rock. This album was recorded live in Nov 2017 and features 4 tracks between 10-12 mins each. Martillo starts things off with a heavy slow bass line and then pretty quickly the track gains in intensity with some guitar with a lot of delay and reverb, making it all sound pretty spaced out. It really rocks out at the end. Amanecer en Tres Cruces starts slowly and spacey but then the bass and drums start to drive the track forward as the spaced out guitar is sort of slowly trying to catch up with the guys with the long delays on the guitar sort of holding him back! After awhile, the tracks has a sort of soft landing. I really dig the bass playing as the track floats in these parts. Antiguos Dioses sobre Chilca is the longest track at 13mins and starts with some spaced out guitar effects over the slowly building drums and bass. This track features a highly effected vocal in the middle over a more melodic guitar section before the real intense guitar kicks in again. I wish he would change his sound a bit more though as this very deep reverb/delay sound gets a bit tiring on your ears and can make all the songs sound a bit too much the same. He plays super cool stuff though. Templos finishes off this album and starts with a very repetitive bass line as the guitar lightly guides and spaces out over the top. After a few minutes the drums starts to build up again and off we go.. into some familiar territory- Spaced out Peru!

If you are a fan of the old La Ira de Dios, this is heading back into that direction for sure. Really cool guitar from the guy in Serpentine Satellite as well. Pounding drums. Spaced out stuff from Lima, Peru!! Enjoy.