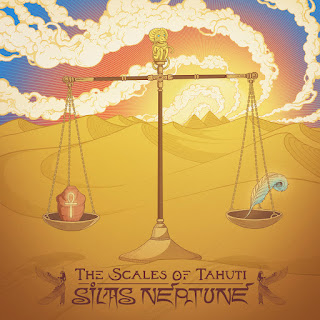 Silas, is the son of Ed Wynne (Ozric Tentacles) and this is his first solo work. IT is a long album featuring 7 long tracks of ambient electronic music with world music influences, reggae, techno but mostly spacey soundscapes and samples.  Feathers of Ma´at starts things off and is a diverse track with many cool moods and style shifts. Aqualight has this dreamy state to it and some of the same sort of synth sounds found in the more ambient Ozrics material. Drums are more like a table like (not that close to the real thing). I am not a fan of programmed drums. Underneath the main keyboard line there are quite a few things going on if you listen closely, at least 2-3 different layers. Occasionally, some of the synth sounds are manipulated and twisted. Cool track.  Yawning Mountain features a more prominent bass line and some nice swirly synths. Lots of interesting stuff happening in this track. Did I hear glissando guitar??  Later, Ed plays a very nice solo and it sounds like a Joie style keyboard solo. Nanodots starts with a very eastern inspired string instrument (sampled or played??). Anyway the track evolves in a very cool way with pan flutes, acoustic guitar and other layers of otherworldly sound. Becomes Everything has a more uptempo drum pace and some interesting growly sounds at times and provides a more energetic experience after 5 slow tracks. Some amazing synths on this track and trippy and highly manipulated at times! There is one line taken directly from an Ozrics track, that OT fans will recognize. This should not be surprising as it is the same synthesizers that the band uses and most of the plays on the album. Devachan-Sand Goblins takes you back to the floating gardens of Neptune with its lush layers of spacey synths. Very much like Nodens Ictus stuff (I have not heard the new one yet).  The drums kick in at different intervals and there are some like female voice like synths as well.  Mergoblins?? The end part of the track is really cool with the trippy manipulated synth. Gateway to Dreamtime finishes off your musical adventure to Silas’s Neptune. Would love to see Silas get over to some of the great electronic music festivals in Portugal. Cool album, congrats.

This is a list of all the people who contributed to the making of this record and it is quite impressive:  Silas Neptune, Ed Wynne, Brandi Wynne, Joie Hinton, Natan Mantismash, Roy Brosh, Balazs Szende, Dominic Gibbins, and Paul Hankin.


https://www.facebook.com/silasneptunemusic/
Posted by Scott aka. Dr. Space at 9:57 AM